Undoubtedly the biggest fanfare surrounding tech this week is the announcement of Apple’s latest offerings. A new iPhone, iPad, Apple TV and the new, Apple Pencil.

The iPhone 6S has a new camera, chip, aluminium body, and 3D Touch – the iPhone’s version of the right-click, some have said. The new iPad Pro is bigger, faster and can attach a keyboard smart cover (if you’re willing to pay $160 more…)

Apple TV has more storage, more RAM, and the ability to use dedicated apps. It will however be $50 more expensive than the previous iteration. The Pencil is $99, but is getting rave reviews about the lack of delay between your stroke and the representation on screen, as well as the differences in how hard you press the Pencil (like in real life) and the angle at which you use the Pencil.

Well this is huge news.

Starting September 30, Instagram Ads will be open to everyone around the world.

An interesting tidbit from AdAge about Instagram’s ‘Marquee’ ad type: “The unit offers brands a guaranteed number of impressions as well as guaranteed placement toward the top of people’s photo feeds. Brands will be able to buy these ads to target broad audience groups, typically based on an intended audience’s age and gender, and there will be limitations on how many of these ads will be available per day.”

The article seems to make note of the fact that, “No one has seemed to complain about them interfering with the user experience.” I would disagree. Mike’s talk at Full Stack Marketing shows plenty of examples of people not enjoying the user experience.

Guinness’ advertising is famously great. Their longstanding affinity with sponsoring rugby means that this tie-up feels natural. The Rugby World Cup begins next week and so Guinness have released a couple of adverts  (done by AMV BBDO) surrounding the darker sides of individual’s stories.  Ashwin Willemse escaped a life of gangs and crime to play rugby for South Africa, and Wales’ Gareth Thomas talks about his struggles in the advert below:

Whilst it’s a great piece of content, it doesn’t really link Guinness too well with it. It maybe works better by relating Guinness to rugby and therefore rugby fans will be more likely to recall at games, but it doesn’t make me want to go out and buy Guinness. They have done better in that respect (and it’s an excuse to link to one of my favourite ever adverts):

Why your smart home is Samsung’s next big thing

A really interesting read from CNET on the future of the Internet of Things, specifically with Samsung’s shift towards getting people wearing their smart watches. 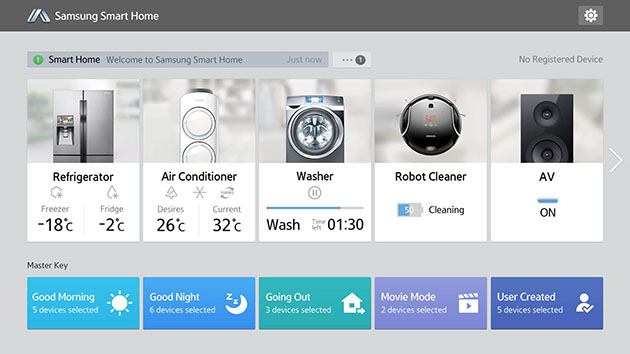 My biggest bugbear with ‘connected home’ concept is the potential for you to be locked in to a certain brand. However, according to the article, “Samsung emphasizes that it’s “open,” which means its appliances and smart-home hub, created by the SmartThings startup it acquired last year, will work with non-Samsung devices.”  Reassuring to hear, but also astute from Samsung, given that consumers don’t want to be forced (and may actively rebel against) having to buy all Samsung (or whatever brand) appliances. Ensuring that any smart devices work with their system irrespective of device manufacturer is more likely to garner

Android Pay Launches (In the US…)

“Android Pay works with all NFC-enabled Android devices (running KitKat 4.4+), on any mobile carrier, at every tap and pay ready location across the US. Android Pay will support credit and debit cards from the four major payment networks: American Express, Discover, MasterCard and Visa.”

Great news if you live Stateside, but not so much if you live in any of the other 190 countries around the world. Google don’t seem to like doing global rollouts. Android Pay is cool, but to be honest, there’s no difference for me between pulling out a credit card and paying by contactless or taking my phone out of my pocket and paying by contactless. If anything, I think more people over here are versed in contactless payments by card; if you start throwing your phone out, you might get some weird looks.

That said, the fact there are a lot more manufacturers of Android phones as opposed to Apple phones, it could be that Google Pay becomes the choice for those who want to pay through their phone. Let’s all remember, Japan has been doing this since the early 2000s…

That’s it for this week’s Top 5 Reads of the Week! Have we missed any great tech or marketing news? Let us know in the comments or at @VelocityDigi.

You can also listen on iTunes.